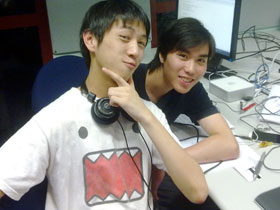 The annual gamefest was the biggest ever – and for the third year running the University of Waikato’s Computer Science Department hosted the Hamilton event.

It attracted 37 would-be game developers willing to take on the challenge of creating an innovative five-minute computer game, based on the theme of extinction, in just 48 hours.

The Hamilton weekend culminated in a People’s Choice Award for the game judged best by the group. The winner was Tim Rudkins who produced a solo effort entitled Extinction of Thought. In the game, the player is a dictator trying to extinguish ideas, leaving the people of the country dull and grey.

Also popular was the game Flee, created by Amigo Huang and Pascal Tian. Both are Waikato students; Huang is partway through a Bachelor of Computing and Mathematical Sciences and was responsible for the programming side of the game, using Unity3D, while Tian, who’s completing a Bachelor of Computer Graphic Design (Hons), looked after the visuals.

In the game’s 9/11-style scenario, the single player has to try to stay alive in a falling building. “Basically the player is an office guy and the world is coming to an end,” explained Huang.

The player has to jump from floor to floor to survive, while negotiating various obstacles – furniture, laptops, water coolers and even a vending machine – which slide around the floor as the building tips. There are also explosions which create further mayhem.

It was Tian’s first experience of the Global GameJam, and he said he was happy with what they’d managed to produce over the weekend. “I enjoyed it and came out with a product I can look at and say oh, that’s quite cool.”

The two fledgling game developers are now planning to work further on Flee and submit it to an Intel-sponsored competition. Intel AppUp is offering US$200 to GameJam teams who load their games onto the AppUp store by the end of February.

The Waikato GameJam was sponsored by Lightwire, Datacom and the Waikato Students Union, who laid on free pizza and coke for the participants throughout the weekend,

Waikato computer science lecturer Bill Rogers, who organised the Hamilton event, said he was impressed at the variety and quality of new game ideas.

He said a range of programming systems were used, including Scratch, XNA, UDK, C++ and Flash. “One team of Waikato students -- James Bridgewater, Martin Poot and Thomas Verstappen -- used UDK (The Unreal Development Kit from Epic Games, as used to make Unreal Tournament III and Gears of War) for the very first time, building a game mod that allowed players to construct destructible bases.”

Mr Rogers said the challenge of developing a novel game in 48 hours might seem overwhelming. “But there is satisfaction in pushing yourself to the limits of your imagination, skill and endurance. At the end you can say that you took part, you did your best, and you have a game to show for it on the International Game Developers Association website. It's something you can proudly put on your CV - evidence that you can perform under pressure.”