Giant knitted periodic table to be unveiled at Waikato 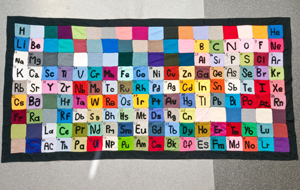 Fabric of Elements: Chemists across the country have knitted a giant periodic table in celebration of the International Year of Chemistry.

Chemists across the country have knitted a giant periodic table of the elements in celebration of the International Year of Chemistry.

The 3.7m by 1.9m knitted periodic table will be unveiled at the University of Waikato during the New Zealand Institute of Chemistry conference starting later this week.

The project was initiated by the Wellington branch of the New Zealand Institute of Chemistry and took more than three months, approximately 8km of pure wool and 162 knitters to piece together.

Waikato University staff and students were among those worldwide who took part in the knit, many picking elements with a special meaning to them.

University of Waikato Chemistry Department technician Wendy Jackson knitted the Xenon square as it is a noble or inert gas whose name means strange and whose atomic number has a connection to her age - while MSc student Jane Spenceley knitted Protactinium as her third year inorganic essay involved that element.

Conference convenor Dr Michele Prinsep said the conference at the University of Waikato was a great place to display the knitted periodic table as many who took part will be able to see the end result in person.

“We are especially fortunate to be hosting the conference in the International Year of Chemistry. Hamilton has the highest number of scientists per capita of any city in New Zealand and with Waikato being ranked the top university in the country for chemistry research, it is especially apt to be doing so.”

The conference starts on November 27th and during its five days, there’ll be a variety of local and international presentations, covering all areas of chemistry and related scientific pursuits.

Giant knitted periodic table to be unveiled at Waikato is licensed under a Creative Commons Attribution 4.0 International License.