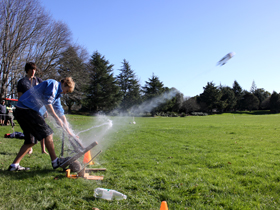 A huge crowd gathered at the University of Waikato this week to witness the launching of homemade water bottle rockets made by local secondary school students.

The winning rocket was from Hillcrest High School student Sam van Oosterom, whose creation soared an exciting 130m across the Waikato University field. Second equal was not far behind, at a distance of 120m. The winners of second equal were also from Hillcrest High School and included Jordan Cronin and a joint effort by John Chang and Richard Lee.

School teams were challenged to design and build a water bottle rocket that would travel the greatest distance horizontally, using only a 1.5 litre bottle, plastic and cardboard, a limit of 80psi of pressure, and some imagination.

The bottle rocket competition was part of the OsPEn Lectures, an annual event at the University of Waikato aimed at Year 12 and 13 students who are high achievers in science. Students attend lectures and practical demonstrations that focus on applications of physics and provide examples of how the physics they are learning at school can be used. Links are made back to the NCEA level 2 and level 3 curriculum.

About 650 students from Waikato and Bay of Plenty high schools attended over the two days from June 30 to July 1.

“The intention of the days is to cover physics-related topics to a more specialised level than what these students will have seen in their schools. A big part of it is to get them inspired and involved. A plus side for the students is that they get a taste for university life as well.”

The students heard from Dr Hamish Campbell from GNS Science about the physics of earthquakes, Dr Rod White, the head of NZ Measurement Standards Lab about the fundamental importance of consistent standards for scientific measurement, Dr John Campbell from Canterbury University about the challenges of being a physicist and Mr Chrystall on rockets and microgravity.

The event is supported with sponsorship from the Waikato Science Learning Hub, the NZ Institute of Physics and Rocket Lab.

Osborne Lectures began in 1986 in honour of Dr Roger Osborne, who taught physics at Waikato University from 1970 to 1985. During this time he was responsible for organising and presenting a significant number of lectures for year 12 and 13 physics students in the Waikato region. From 2002 the lectures became known as the OsPEn Days.