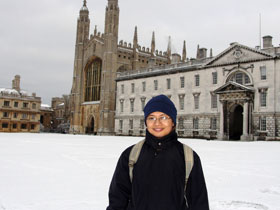 Shrestha was awarded a QEII Technicians’ Study Award, allowing him to expand his knowledge in electronics and optoelectronics, and study alongside experienced scientists at Cambridge University. His internship ran from November 22 – January 22, during one of the worst winters the UK has seen in 50 years.

“I was involved in building the optical test facility for optically addressed spatial light modulators. This is a type of Liquid Crystal Display (LCD) technology which will be used for 3D display monitors. I was working with Dr Neil Collings of the Photonics and Sensors Group of the Department of Engineering, who is known internationally for his work in this field.

“It was amazing to see cutting-edge technology at one of the best universities in the world and I found it intriguing to see how concepts and ideas were developed into projects which were in the process of becoming commercial products.”

The freezing weather meant Shrestha was not able to travel as much as he had hoped. Instead he enjoyed a white Christmas and the highlight of a work Christmas function, “celebrated in true English style.”

Shrestha also enjoyed the cultural experience of Cambridge and the history the area holds. “It was quite humbling to be at the place where Newton, Stephen Hawking and so many other great people once worked.”

The QEII Technicians’ Study Awards were inaugurated in 1970 and are upheld by the Ministry of Education. The awards encourage and promote the pursuance of advanced technical education, training and experience in Commonwealth countries.