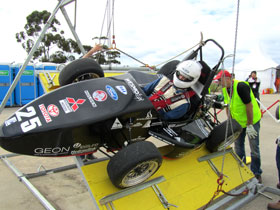 Start your engines: University of Waikato Formula SAE Team member Luke van Dijk enjoys the ride as the team’s race car is tested for leaks and stability, by titling the car to 45 and 60 degree angles, during the Formula SAE-A competition in Melbourne.

A second place and a number of personal bests in the static events at the Formula SAE-A competition in Melbourne were not enough to gain the University of Waikato Formula SAE Team the overall top ten placing they were hoping for, following starter motor failure before the car could be raced.

The student team received high marks in the Design and Business/Marketing sections of the competition, including an outstanding second place in the Cost section, out of the 28 teams competing.

The team passed the very thorough scrutinising from judges and tilt tests, with only a couple of minor things to be fixed. This was a significantly better result than the previous year. The checks ensure that every aspect of the car’s design is within the rules and is safe to race.

The tilt test requires the car to be tilted in both directions at both 45 and 60 degree angles. The 45 degree angle checks the car for leaks (engine, brake fluid etc), while the 60 degree angle simulates the 1.5G of force experienced navigating a corner.

All tests carried out on the car before the competition were going well. “It wasn't until the noise test that our problems began,” says David Lynch, WESMO Co-Chief Engineer and Brake and Controls Team Leader.

“We weren’t able to get our engine started and while trying to diagnose the problem we burnt out our starter motor. We couldn’t get a spare at such short notice, so unfortunately that was the end of our competition. You can only imagine how gutted we were!”

Almost a third of teams at the competition were unable to compete in racing because of their own car troubles, and only nine of the 28 teams completed all events. “The final day of the competition was a great opportunity for our team to have a good look at the other cars and get some ideas for the future direction of the WESMO race car,” says Nicola Harrison, Team Leader.

The team agree that although it was extremely disappointing not to get racing at the event, it was still an enjoyable trip and the year as a whole was an invaluable experience for everyone involved.

“Competing in Formula SAE really does give you a step up and help you make the most of your time at university,” says Lynch.