Acting Minister of Energy and Resources a distinguished alumna 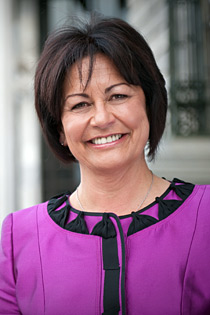 New Zealand’s Acting Minister of Energy and Resources, Hekia Parata, is being presented with a Distinguished Alumni Award from the University of Waikato this month.

Elected to Parliament in 2008 after a long and successful career in the public sector, Ms Parata is also the Minister of Women’s Affairs, the Minister for Ethnic Affairs, and the Associate Minister for ACC and for the Community and Voluntary Sector.

Born and raised in Ruatoria, Ms Parata attended Gisborne Girls’ High School before going to Waikato University where she graduated with BA and MA degrees (in Māori) and became the first Māori woman to be elected student president.

Ms Parata is of Ngāti Porou and Ngāi Tahu descent and comes from a family with leadership in its blood. Her great-grandmother, Materoa Ngarimu Reedy, was a Ngāti Porou leader of her time; her Ngāi Tahu great-great-grandfather, Tame Parata was MP for the South Island; and another of her Ngāti Porou tipuna, Sir Apriana Ngata, has been described as New Zealand’s foremost Maori politicians to have ever served in Parliament.

"I entered Parliament proud to follow in the footsteps of these ancestors in the pursuit of quality citizenship for all. They provide a model that I am glad to emulate: unambiguously Ngāti Porou and Ngāi Tahu; unequivocally a New Zealander,'' Ms Parata says.

"I believe that the role of the Government is to create an environment of opportunity and choice, enterprise and growth; to provide high quality education and health services and law and order to protect the person and their property; to invest in and reward self-reliance, personal accountability, and an attitude of reciprocal obligation; to support families and communities to be self-determining and self-directed; and to limit the size and intrusion of the State so that people can be powerful actors in their own lives.''

Ms Parata has also held a number of governance positions on boards and trusts in the private, public and iwi sectors and been a Senior Executive Fellow at the Kennedy School of Government at Harvard University, and at Templeton College, Oxford.  She has also represented New Zealand at many international forums, included the World Bank, United Nations and South Pacific Forum.

With her husband, Sir Wira Gardiner, Ms Parata ran a private consultancy business advising clients in New Zealand and around the world on public policy – in areas of education, government services, gender and cultural equity issues.

University Vice-Chancellor Professor Roy Crawford says Ms Parata is a proactive and clear-thinking New Zealander dedicated to the success of her country on a global stage, but always looking for ways for communities to drive and enhance their own development.

"I am honoured and humbled to be acknowledged by the University of Waikato,'' Ms Parata says. "Early and continuing education has been the springboard for my professional choices. I believe successful education experiences transform the lives of individuals, their families, their communities – and their nation.''