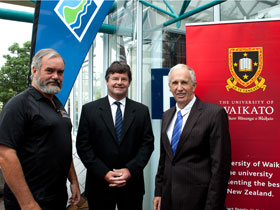 The professorial role is based at the University of Waikato and is being funded for 10 years by the Bay of Plenty Regional Council. A whakatau was held for Professor Battershill on January 18 in Tauranga to welcome him to the Bay region. It was attended by about 60 representatives from the regional council, the university, district councils, industry groups and others.

The regional council’s Chairman John Cronin told guests the important role had been a long time coming – it has been nearly 12 months since the university and regional council signed the Chair in Coastal Science agreement. The role will see a multi-disciplinary approach to research into coastal marine issues in the Bay of Plenty and the ecological management of that environment.

The regional council already funds the Chair in Lakes Management, also based at the University of Waikato. Mr Cronin told guests the great success of that Chair, held by Professor David Hamilton, was a major reason the council was keen to fund another role. A professorial chair is a named position in a university funded through a gift or endowment. It pays for the salary of the Chair, and often supports associated costs and other research.

The new Chair in Coastal Science is an integral part of the INTERCOAST programme, established by the University of Waikato and Bremen University in Germany to focus on marine research in the Bay of Plenty region.

Mr Cronin paid tribute to the university’s Professor Terry Healy, who died last year. Professor Healy was a major driver in the establishment of the Chair in Coastal Science and spent many years working in the Bay region. “Terry Healy paved the way for Chris Battershill,” Mr Cronin said. “He did a tremendous job in and around Tauranga Harbour. He was absolutely inspirational and is a tremendous loss for Waikato University,” Mr Cronin said.

Professor Battershill, who will be based in Tauranga, said he was “enormously humbled” by the welcome, which was held at the Bay of Plenty Polytechnic. The university has been working with the Polytechnic for more than a decade to develop programmes and increase tertiary education opportunities in the area.

Professor Battershill comes to the role from a position as Principal Scientist and Research Team Leader at the Australian Institute of Marine Science. He told guests he was looking forward to the new role of researching the Bay of Plenty coastline as New Zealand and the Bay region had all the environmental entities on their doorstep.

The university’s Deputy Vice-Chancellor, Professor Doug Sutton, said basing the Chair in Coastal Science in Tauranga was another example of the university joining forces with organisations to provide excellence in teaching and research to benefit the region.

Professor Sutton said it was important that the university helped deliver high quality and relevant teaching and research in and for the Bay of Plenty.

Professor Battershill’s research was truly world-class, Professor Sutton said. “Chris Battershill discusses the Bay of Plenty with passion. He is able to choose where in the world he works and he has come here to do high-quality science in this place.”

Professor Sutton acknowledged the funding of the Bay of Plenty Regional Council for the role, and the support of many regional organisations such as Priority One, iwi, community groups and other councils.

New era in coastal science kicks off is licensed under a Creative Commons Attribution 4.0 International License.