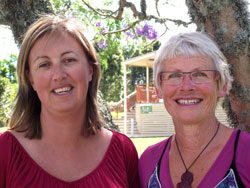 Two new Bachelor of Social Work lecturers have joined the University of Waikato’s Tauranga campus as the programme’s growing popularity has pushed student numbers up.

Programme convenor Trish Hanlen says the new “strengthened” team is well resourced to manage the growing popularity of the four-year Social Work programme, which has seen student numbers increase from 33 students in its first year of operation in 2009 to 74 this year.

“We’re into the third year of this new degree so as the number of first year students increase each year, the total number of students moving through the degree also increases,” she says.

“Each year we have also broadened the range of elective papers on offer and last year were able to offer placements for our third and fourth year students for the first time.”

The Bachelor of Social Work was the first programme jointly developed as part of the University’s partnership with the Bay of Plenty Polytechnic. While it only began two years ago in 2009, it has included both University social sciences students and graduates of the two-year Diploma in Social Practice from the Bay of Plenty Polytechnic, who have gone on to complete the final two years of the degree. The April 29 graduation ceremony in Tauranga will see the first few graduates from the new programme.

Mrs Hanlen attributes the growing popularity of the programme to the increasing community awareness of social issues and the wide range of career paths that a social work degree can lead to.

“The news media has helped to raise awareness of what’s really going on in our communities and social workers are being more highly valued than ever before.”

She says last week’s SEEK job figures for January showed social workers made the top five list of most sought-after employees in New Zealand for the first time. “People are realising that for social issues to improve we need trained professionals who are skilled and knowledgeable about ways to assist.

She says Sonya Hunt and Kelly Smith are highly experienced social work practitioners and bring to the programme a wealth of experience and theoretical knowledge, having both worked in a diverse range of social work settings. With the new team on board, Mrs Hanlen says the University is currently in consultation with both statutory and non-statutory agencies over plans to offer postgraduate papers in the future for students wanting the opportunity to continue their study up to Masters level.

“We work closely with the region’s social work profession and our community advisory committee to develop the programme and ensure it remains relevant to community needs. Being able to offer postgraduate study for students in management and supervisory roles, or those involved with the care of vulnerable older people, would make a positive difference to the profession.”

While social work practitioners only require a three-year degree to become registered, Mrs Hanlen says the University wanted to offer an indepth four-year programme which is in line with the international benchmark for standards of social work education, as well as being relevant to the Bay of Plenty and Waikato region.

Students are now gearing up for the start of Semester A which begins on 28 February.