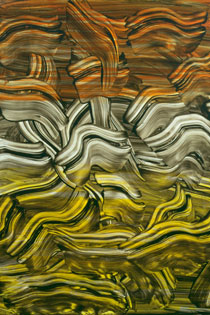 Rohan Wealleans won the Waikato Contemporary Art Award in 2003 with his work To the Moon and Back. A controversial winner, it was described by judge Tobias Berger like this: "All these layers of paint made me think about time and sexuality...art and sex being some of the oldest pursuits given to humankind."

Waikato University Art Collection Curator Karl Chitham says Millar and Wealleans are perfectly placed to engage with the theme of the exhibition. “They push against traditional notions of what painting is and how it’s presented.”

Millar often paints on aluminium and uses various materials including acrylic, oil and wax – sometimes applying it with tools and sometimes just with her hands.

Rohan Wealleans uses commercial grade paints, saturating his canvas in untold layers of paint which he cuts into and combines with found materials such as crystals and sharks jaws. “He’s blurring the lines between sculpture and painting, and both artists have attracted heated discussion in the past,” says Chitham.

“But I think that’s a good thing. In an environment of apathy it’s great to have people stirred and engaged by art.”

Two lesser known artists will also have work in Pushers. Toni Mackinnon uses digital processes and meticulously painted abstracts, lifting material from sources like LIFE magazine, National Geographic and printed material from the 1950s-1970s. Installation artist Matt Heays is a recent masters graduate from Elam School of Fine Arts. He originally trained in graphic design, is a filmmaker and has worked as an animator for the advertising industry.

Karl Chitham, himself an artist with a masters degree in sculpture and with numerous curatorial projects to his name, says he’s planned a total of six art exhibitions at the university this year, featuring established and up and coming artists who work in a variety of genre. “It’s hugely satisfying to be able to pull together a selection of significant contemporary artists and their works and mix them with works from the University’s extensive collection.”

Pushers opens on 12 February and runs until 27 March at the Calder & Lawson Gallery at the Academy of Performing Arts at Waikato University.

Karl Chitham talks in below video about the six art exhibitions on display throughout 2011.