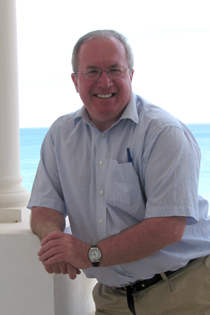 New Zealand’s foremost military historian Dr Chris Pugsley, will be awarded a Distinguished Alumni Award from the University of Waikato.

Dr Pugsley earned his PhD at Waikato in 1992. It was published as ‘On the Fringe of Hell: New Zealanders and Military Discipline in the First World War’, and he has since gone on to write 15 military books.

Dr Pugsley is a senior lecturer in War Studies at the Royal Military Academy at Sandhurst in England where he lectures on the evolution of warfare in the 20th and 21st centuries.

Alongside his research and writing, Dr Pugsley has worked with major institutions on travelling and permanent exhibitions, film research and cataloguing and as a consultant to National Archives New Zealand on the War Art Collection and the New Zealand Film Archive.

He is also interested in the New Zealand wars of the 19th century and is writing a book about New Zealand official film in the First World War. He has a goal to visit and walk every New Zealand battlefield in Europe and the Mediterranean.

Dr Pugsley says he’s honoured to receive the Waikato alumni award. “And I’m conscious of how lucky I am because circumstances have given me a lifetime of opportunities to pursue the things I love, namely military history in its broadest sense and of the New Zealand experience in particular.

“I am humbled and feel something of a fraud for being recognised for pursuing my hobby. As I tell my friends and colleagues, ‘The Queen pays me to indulge’; not many people are so fortunate.”

Dr Pugsley, recognised internationally as an authority in his field, is also a senior adjunct fellow at Canterbury University and a Fellow of the Royal Historical Society.

Waikato University Vice-Chancellor Professor Roy Crawford says Dr Pugsley’s research enhances our understanding of the impact war on New Zealand and New Zealanders - in personal terms and in our social, cultural and political development. He will receive his Distinguished Alumni Award at the University of Waikato on 19 August.

Dr Pugsley will be speaking at a reception on 18 August at the Gallagher Academy of Performing Arts.