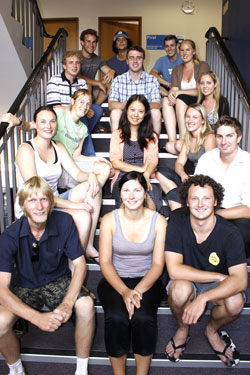 Scholarly Smiles: A group of University of Waikato Masters and Doctoral Research Scholarship winners enjoyed a congratulatory afternoon tea held this week to celebrate their success.

Using chicken feathers to make bio composite materials and studying Antarctic aquatic microorganisms are just two of the exciting topics which will be supported by Waikato University’s Masters and Doctoral Research Scholarships this year.

Each masters scholarship winner will receive up to $12,000 over a period of a year and a contribution towards enrolment fees for that year. Winners of Doctoral Research Scholarships (both domestic and international) will receive living costs of up to $22,000 per annum for up to three years and an amount equal to their annual tuition fees.

Kerry Barker, a former Waikato Diocesan School for Girls student and a recipient of a Masters Research Scholarship, is working with Wallace Corporation Ltd to devise a way to use chicken feathers to make bio composite materials. These materials can be used in everything from building materials to sports equipment. Wallace Corporation Ltd processes the blood, offal and feathers of over 250,000 chickens a day.

“The field of bio composites was only really formed in 1989, so it is in its infancy. The type of materials I am hoping to create would be sound and heat insulating panels for the building sector and also structural materials like pallets. The idea behind utilising agricultural waste is that it’s cheap and it has the ability to degrade in the environment, unlike some synthetic materials which can take hundreds of years to break down,” says Kerry.

Former Putaruru College student Stephen Archer, winner of a Domestic Doctoral Research Scholarship, will study Antarctic aquatic microorganisms. He hopes to understand how a community’s population and metabolics change between the extreme environments found in Antarctica, in the hopes of understanding the systems, how sensitive they are to human contamination and the effects global climate change will have to this sensitive and valuable scientific resource. Stephen previously visited Antarctica as part of his masters research and hopes to return there at the end of this year.