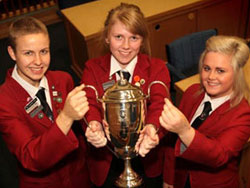 Two Hamilton Sacred Heart students have been awarded $3000 scholarships to study law at the University of Waikato.

Rochelle Monk and Leah Caddigan were members of the Sacred Heart team that won last year’s secondary schools’ Mooting Competition involving about 40 schools from the Waikato, Taranaki, Auckland and Hawke’s Bay.  Part of the prize was a $3000 scholarship if the students chose to study at Waikato's Te Piringa - Faculty of Law.

Rochelle Monk will be studying for a Bachelor of Laws and a Bachelor of Science. “I’ve got this 20-year plan. I want to study either environmental or criminal law, practise in one of those areas and then return to lecture at university. I like the ‘hands-on’ approach Waikato takes to law – the mooting and the debating – and Waikato also has a good name in science, so it made sense to study there.”

With the law scholarship and the school leavers’ scholarship offered by Waikato, it means Rochelle will only have to find money for text books during her first year of study. The 18-year-old is a hard worker and high achiever. Last year she went to the United States as one of 20 New Zealand secondary students to attend the Global Young Leaders’ Conference. “That helped solidify what I wanted to do with my life and what I wanted to make of my career.”

Leah Caddigan doesn’t have any lawyers in her family but she does know a few and she talked to them about their work before enrolling at Waikato. She wants to study criminal law and be a barrister. “I’ve always wanted to be a lawyer and decided to take part in Waikato University’s mooting competition to get a taste of what it might be like. It would either encourage me to study or put me off altogether!”

It was the former. In a moot students are given a moot problem (hypothetical case), some research material and from that they develop a case which they argue with an another school along the lines of an appeal. Semi-finals are held in Hamilton’s District Court, the finals in the High Court before a judge and senior practitioner.

Leah says she found the mooting hard work, but a lot of fun. That she won $3000 for her efforts was a welcome bonus. Like Rochelle, her first year fees are now covered, but both students say they will continue working part time while they’re studying for their degrees.