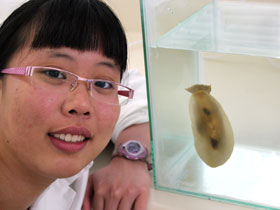 Slug Heaven: Waikato summer scholarship and Bachelor of Science (Technology) student Serena Khor says she has developed an attachment to sea slugs and thinks they are "definitely cute".

Sea slugs may not be the cutest creatures, but for one University of Waikato summer scholarship student they have a certain appeal.

“When you feed and care for something, you develop an attachment, and sea slugs are definitely cute,” says Serena Khor, a Bachelor of Science (Technology) student majoring in animal behaviour.

Serena is spending the summer at the Cawthron Institute in Nelson where she’s working with research scientist Dr Susie Wood on a research project looking at a particular sea slug species linked to the deaths of dogs on Auckland beaches in 2009.

It’s part of a wider, $750,000 Marsden-funded project, headed by Waikato University’s Professor Craig Cary in collaboration with Cawthron, to identify the source of the deadly toxin, tetrodotoxin in the grey side-gilled sea slug (Pleurobranchaea maculata).

Tetrodotoxin is also found in the puffer fish and can be deadly to humans. The exact origin of the toxin in the slugs is unknown. It may be the sea slugs, like puffer fish, harbour toxin-producing bacteria, or they may accumulate the toxin from a dietary source. A third possibility is that the sea slugs may make the toxin themselves.

One of Serena’s tasks is to tend to a group of sea slugs – toxic ones from Auckland, and non-toxic ones from Nelson -- that are being monitored to see if there’s a link between toxicity and their diet.

“They wouldn’t eat at the beginning, which could have been to do with stress at being kept in captivity or temperature issues,” says Serena. “But now that they’re in a temperature controlled room, they are all eating and our experiments are going well.”

Another experiment involves dosing pinhead-sized sea slug larvae with antibiotics to kill off any bacteria harboured by the creatures so as to narrow down the source of the toxin.

“So far we’ve found tetrodotoxin in the toxic sea slugs in all the life stages from larvae to adult,” says Serena. “If we can remove any bacteria and the toxin also disappears that would provide strong evidence that the toxin is produced by symbiotic bacteria.”

“We’re also testing to see if the Auckland sea slugs have evolved some resistance to tetrodotoxin by putting toxic and non-toxic sea slugs together in specially designed tanks. So far, the non-toxic Nelson slugs are surviving – which suggests all slugs can withstand the effects of the toxin. Next we will test the non-toxic ones to see if they have accumulated the toxins.”

Apart from growing fond of her sea slug charges, Serena has learnt lots being in a laboratory environment. “Being at Cawthron, I’ve learnt all about lab techniques, which has made me interested in going on to post-graduate study.”

The University of Waikato’s annual Summer Scholarship programme aims to give students the chance to experience research with an established academic. It’s open to students who are currently enrolled in an undergraduate, a final-year honours or a first-year masters degree at a New Zealand or Australian university. The scholarships are for ten weeks and come with a $5,000 stipend for the student.