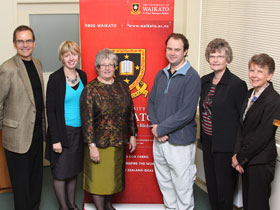 Society’s move towards self-service is problematic for some of the older people in our communities and the lack of face to face contact with some organisations can lead to elders feeling frustrated.

These are some of the findings of a team of researchers at the University of Waikato at the end of the first phase of a three year study into positive ageing.

Funded by the Foundation for Research Science and Technology, the study aims to learn about what happens when elders and representatives from a range of organisations and businesses interact and how these interactions can be improved.

In the first phase of this study, researchers carried out face-to-face interviews and focus groups with 123 elders and kaumatua, and also got some to keep observation logs. The researchers also interviewed frontline staff at a variety of organisations and businesses – including medical and health organisations, retail outlets and banks.

“We found that elders are more satisfied than dissatisfied with their interactions, but there were several aspects that could be improved,” says researcher Dr Margaret Richardson from Waikato University Management School.

“There’s a general reluctance by elders to complain – I think a lot were brought up that way – but many reported that they struggle with self-service checkouts at the supermarket and petrol pumps. They also became frustrated when dealing with matters over the phone, especially carrying out recorded instructions. And much to their annoyance, they found that some government departments offer no opportunity to carry out business face-to- face.”

Dr Richardson says organisations could improve interactions with the older segment of the population by proactively identifying their potential needs, including them when developing and testing policies and practices, offering flexibility in service delivery, and training staff to relate to and support older people better.

Dr Richardson says elders don’t like being yelled at or talked down to, but from a business or organisational perspective there are things elders can do to improve their interactions.

“Organisations said they wanted their customers to make complaints rather than keep silent, and they appreciated knowing if their customers have disabilities that impede their interaction.”

Dr Richardson also says that elders should not be afraid to ask questions, to ask for help if needed, and to use the services and resources available to them.

She says she was surprised to find that there were still many physical barriers to accessing organisations, and their products and services.

“For instance, why do deli sections in supermarkets put their ‘ring for attention’ bells on the top of the cabinets where people in wheelchairs can’t reach them? Why are building doors so heavy? People with walking frames struggle to get through them. Why are the seats in many waiting rooms so low when many older people find them embarrassingly difficult or impossible to get out of? ”

The next stage in the research will involve running joint workshops with elders and representatives from organisations to identify a tentative framework of elder-friendly practices that will then be trialled in Stage 3. The full study is due to end in October 2012.

Self service and faceless business frustrate elders is licensed under a Creative Commons Attribution 4.0 International License.