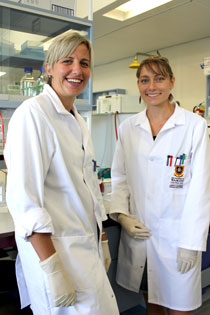 Revolutionary Research: From left to right Waikato University biologists Joanna McKenzie and Emma Littlejohn are helping in the fight against tuberculosis.

Ground breaking research that could help in the fight against tuberculosis has earned two Waikato research students fellowships worth $4,000 apiece.

Funded by income from a bequest by the late Claude McCarthy, the fellowships enable the recipients to undertake original work or research in literature, science or medicine.

McKenzie and Littlejohn are looking at how proteins within the bacteria responsible for causing tuberculosis regulate the bacteria’s growth, which may hold the key to combating the deadly disease.

One-third of the world’s population are carriers of Mycobacterium tuberculosis, but treatment of tuberculosis is difficult due to the capacity of this bacterium to enter a dormant state.

“My research has found certain proteins in M. tuberculosis that possibly regulate the bacterium’s metabolism by cleaving ribonucleic acid (RNA), the molecule which is the blueprint for proteins. This slows the bacterium’s growth, allowing it to conserve energy and survive under adverse conditions,” says McKenzie.

Littlejohn researches proteins that unwind RNA so that other proteins, like those McKenzie is researching, can cleave it more efficiently.

“We’re just at the beginning stages of understanding how this bacterium operates. Understanding how M. tuberculosis enters this dormant state would enable better treatment of the disease and possibly future drug development,” says Littlejohn.

Other Waikato recipients of Claude McCarthy Fellowships were Celia Kueh and Michael Pingram.

Kueh is researching the mechanical behaviours of corrugated paperboard structures such as the boxes used in the packing of fruits and vegetables, creating models which help evaluate the weak points of a packaging design and how it might be improved.

Pingram is researching aquatic food webs in the lower Waikato River, looking at the ecosystem functions and roles of different species and habitats in the river. His research could be used to inform future restoration initiatives.