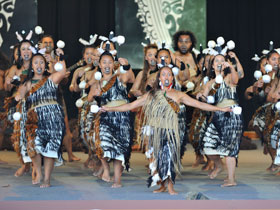 Despite the rain, an estimated 30,000 people attended the four-day event, held at the Waiohika Estate in Gisborne on February 17-20. A strategic partner of Te Matatini for the past two years, the University of Waikato had a number of students, staff and alumni taking part as performers, tutors or judges.

The biennial competition, which dates back to 1972, had 42 teams from 13 regions across New Zealand and Australia competing in what is regarded as a dynamic display of Māoridom at its finest.

Te Matatini Executive Director Darrin Apanui acknowledged the University’s commitment as a strategic partner, and saw commonalities between the pursuit of academic and kapa haka excellence.

See the University of Waikato at Te Matatini o te Ra 2011 or check our Facebook Page for video and photo updates.

See more of Darrin Apanui's interview (below) as he talks about the benefits that Te Matatini and Waikato University bring to each other.