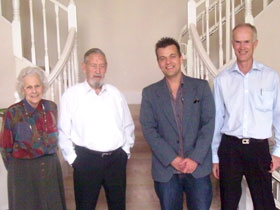 Alex Kravchenko speaks four languages, has degrees in marketing and international management and Chinese language, and is now studying for his PhD in economics.

Twenty-six year old Kravchenko is the first recipient of a doctoral scholarship awarded by Hamilton couple Bill and Joan Flower. It gives him $30,000 a year for three years while he completes his PhD.

One of the conditions of the scholarship is that it must have an agricultural focus and Kravchenko will study freshwater management in New Zealand; current schemes, systems of application, costs and options.

“It’s early days,” says Kravchenko, “I’m still planning how I’ll structure my doctorate, but I met Mr and Mrs Flower and they made it clear that the scholarship was not a gift and told me that my research would need to benefit New Zealand in some way.”

Alex Kravchenko arrived in New Zealand with his scientist mother and engineer father in 2002. He had attended an international school and completed two years university study in Thailand before coming to New Zealand. He arrived in Hamilton hoping to get a job.

“Only no one cared that I spoke four languages and the only jobs I got offered were paying $7 an hour in a supermarket. But then one day I saw a sign for Waikato University that said, ‘So what are you studying?’ and I decided to enrol.”

Kravchenko speaks English (with an American accent), Russian (he grew up in the Ukraine), Thai (from when he lived there) and Chinese Mandarin (because he studied it). At Waikato, he graduated with a Bachelor of Management Studies (Hons) majoring in marketing and international management. He then got a job at market research company DigiPoll. “But I was restless and started studying again, this time for my Masters degree. First part-time, then full-time.”

His knowledge of Chinese gave him the chance to work on one of Waikato University’s joint programmes with Shanghai University, where he lectured economics and management.

“I did that for two years and found myself becoming more and more interested in economics, but when I enquired about doing a PhD in the subject I was told I’d have to complete more undergraduate and Masters-level papers in the subject. So there I was in classes with students I’d previously lectured who’d come to finish their degrees in Hamilton. Just as well I got As!

“My first thoughts were to do a PhD on the proposed New Zealand-Russia bilateral trade agreement, because I’d already started looking at that during my Masters study, but then I went to a New Zealand agriculture economics conference with one of my economics lecturers, Dan Marsh, and I decided that freshwater management might be worthy of more study.”

Dr Marsh says Kravchenko is an outstanding student who achieved grades of A+ or A in most of his economics papers. “Alex is also a gifted teacher who’s assisted with tutoring and teaching on several of our papers. He’s is a very worthy first recipient of the Flower scholarship and we’re greatly looking forward to working with him over the next few years.”