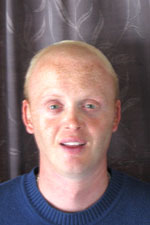 Joe Collins: Is studying for a Master of Arts at Canberra's Australian National University.

One semester into a Master of Arts in international relations and Joe Collins’ money worries have been lifted. The former Waikato University student has been awarded a New Zealand Defence Force Freyberg Scholarship to study at Australian National University in Canberra.

Each semester costs more than $11,000 and in order to meet his study costs for this year, Collins applied for and was awarded the Freyberg Scholarship, which is administered by Universities New Zealand. Graduates must study offshore in an Asia Pacific country and priority is given to students enrolled in the Graduate Studies Programme in Strategy and Defence at ANU.

For his 15,000 word masters thesis, Collins is looking at the justification of violence - the concepts of just war and the legitimate use of force. “I’ve still got to refine my thesis topic, but I plan to cover subject areas such as the responsibility to protect, humanitarian intervention, the use of force to protect aid workers and the moral purposes of the State.”

Collins completed a Bachelor of Social Science in political science and social policy at Waikato and wanted to pursue further study at graduate level when he found a programme on offer at ANU. “They’ve been offering the Master of Arts in international relations for about 40 years and have a solid reputation in that field, so even though it was past the cut-off date for applications I contacted my lecturers at Waikato and together we hurried off an application.”

That was successful. And in a whirlwind three weeks, his grandmothers in England loaned him his first lot of fees, he picked up his brother’s lap top, flew to Australia, found somewhere to live, sorted out his enrolment and started lectures at ANU.

Now Collins has the scholarship the grandmothers won’t have to get out their purses a second time, and it’s expected that scholarship recipients return to New Zealand and work in areas of defence, such as the government service, tertiary education or journalism or perhaps the diplomatic service. “I applied for the army when I left school and was turned down because I had a medical condition, but it’s highly likely I’ll end up working in an area of defence – just not in the way I’d first thought,” says Collins.

He says he feels privileged and humbled to have been awarded a Freyberg Scholarship. “Not just because of the money but because it is a prestigious scholarship and a copy of my thesis will be sent to the Secretary of Defence and the Chief of Defence Force – so I suppose I’m under some pressure! – but it’s the best kind of pressure because it gives me a really positive motivation to work hard.”

Collins says studying in Australia’s federal capital means there are plenty of opportunities to learn about real-life defence experiences. “Some of the students are on government think tanks, one has worked in Afghanistan for Australian Intelligence and we have plenty of interesting guest lecturers with great stories to tell.”