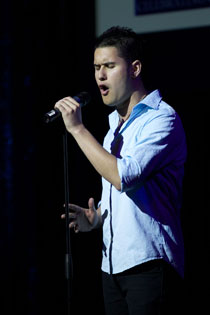 University of Waikato Sir Edmund Hillary Scholar Chase Douglas has been picked as the guest artist to perform with Hayley Westenra during her tour of New Zealand this November.

The tour is an opportunity for Douglas to pursue his professional singing career and hopefully open a few doors. However, it didn’t come about without good contacts and a bit of luck.

Friends with a Superstar

“I got the opportunity through a friend of a friend who knows Hayley and her manager quite well. He got in touch with Hayley and sent her my demo and CV.

“She is one of the most prestigious and prolific classical cross-over stars in New Zealand and the world and they said Hayley was very picky, so I feel very privileged to have this opportunity.”

The nationwide tour ties off a good year for Douglas, who sang in two University of Waikato operas, performed for numerous Lions and Rotary Club charity events and at the Rotorua Lakeside Concert.

The chance to tour with the darling of New Zealand classical cross-over music is a dream come true for Douglas who has been pushed by his mother to pursue a career in singing from a young age.

“Singing started for me going to church and stuff with Mum when I was a kid, she must’ve though ‘wow, this boy can actually sing’ and started getting me into talent quests and musical productions and it just went from there.

“I’ve always been lucky to have wonderful people who are out there to support me and I believe this opportunity will definitely expand my horizons.”

Douglas has been a Sir Edmund Hillary Scholar for the duration of his time at the University of Waikato. The Sir Edmund Hillary Scholarship Programme offers scholarships to academic high achievers who show leadership qualities and also excel in sport or creative and performing arts. Scholars have their course fees covered and receive additional academic support and coaching in leadership and personal development.