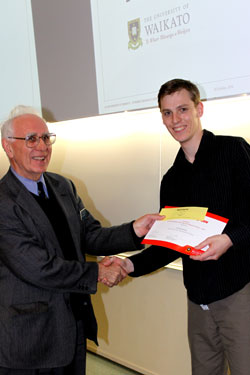 The scholarship, worth $25,000 a year for three years, recognises the work of Sir Bryan Todd, a scientist who was instrumental in the development of the New Zealand oil and gas industry. The scholarship will support Timothy through his three years of study towards a PhD in engineering which he will begin next month. His research will be completed within Waikato University’s Energy Research Group, under the supervision of Dr Martin Atkins, Dr James Neale, and Dr Michael Walmsley, who is Timothy’s uncle.

“The overall goal of my PhD research is to increase energy efficiency of powder production by recovering energy from hot humid exhaust air streams. In many industries recovering this energy is technically challenging because the air is laden with a small amount of powder. This powder raises concerns of effectiveness, fouling and blockages, which can lead to plant down time. The research will address each barrier, with the goal of formulating a new low fouling design energy recovery exchanger to apply to major New Zealand companies such as Fonterra,” says Timothy.

“Once I finish my PhD I’d like to find a position as an engineering lecturer. I enjoy teaching at a tertiary level and I love researching complex problems. In the long term, once I have gained sufficient knowledge, experience and connections to New Zealand industries, I would like to start a consultancy with a focus on energy.”

While studying towards a Bachelor of Engineering (Honours) in materials and process engineering Timothy earned a number of prizes and awards, including a University of Waikato Doctoral Scholarship.

Timothy was also part of a group which won the best process design project for their study on ‘Closed cycled spray drying in industrial milk powder plants’ at the Carter Holt Harvey Pulp & Paper Engineering Design Show. His work on powder deposition has been included in two conference papers and was awarded an excellence for outstanding presentation.

Following his second year at university he was offered the opportunity to join the Metals Research Group in the School of Engineering over the summer break. “As part of my research I travelled to and stayed at Harbin Institute of Technology in Harbin, a city in north eastern China. Although the weather was below freezing, the experience I gained has been very valuable,” says Timothy.

Timothy also has another skill under his belt – he is a fluent speaker and reader of Mandarin. He learnt to speak and read Mandarin following his first year of university, when he took a year off to work as a volunteer missionary for his church. Upon returning to New Zealand Timothy won first prize in the Auckland region’s Chinese Bridge Chinese Proficiency Competition for Chinese second language learners. The major prize was an all expenses paid trip to attend the 7th World Chinese Bridge Chinese Proficiency Competition in Chang Sha, China.