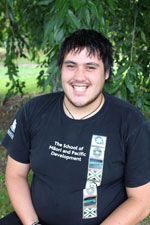 Brosnan, 21, will be performing as part of eastern Bay of Plenty kapa haka group Ōpōtiki Mai Tawhiti at this year’s Te Matatini.

The university is a strategic partner of the four-day biennial competition, which will see more than 1500 performers from 13 regions across New Zealand and Australia take the stage.

Brosnan, who is studying towards a Bachelor of Arts degree in the School of Māori and Pacific Development, has spent the last five months practising non-stop for Te Matatini.

“We’ve had weekend-long practices every second week leading up to the New Year, but for the last six weeks it’s been every weekend,” he says. “It seems full on, but it’s all worth it in the end.”

The dedication and commitment shown by Brosnan is common place among those who will be competing. “My social network is with students who are in other haka groups and they too are practising long hours to ensure their performance is perfect,” he says.

“There’s a lot of friendly banter and rivalry between us and we try not to give out too much information – just in case. But we still support each other fully.”

For Brosnan, kapa haka is more than just performing. “It’s a way of celebrating our culture, and for our haka group, Ōpōtiki Mai Tawhiti, it’s a way of keeping our history intact and alive for future generations,” he says.

The 30,000 spectators who are expected to attend Te Matatini can look forward to a performance that is traditional and worthwhile, says Brosnan. “Ōpōtiki Mai Tawhiti is staying true to itself and we will do what we do best – perform with passion and enthusiasm.”

Ōpōtiki Mai Tawhiti will be performing at 5pm on Thursday February 17 at Te Matatini, which this year is being held at Wai O Hika Estate in Gisborne.

Meanwhile, the University of Waikato still has places available to study in Semester A, which begins on February 28. For more information visit www.waikato.ac.nz

Paora talks in below video about how his studies helped him prepare for Te Matatini.