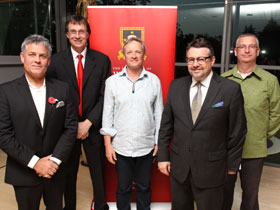 More than 200 members of the public attended the launch of a multi-media opera at the University of Waikato on Anzac Day.

The Juniper Passion was launched at a function and free public performance on Anzac Day evening at the University of Waikato’s Gallagher Academy of Performing Arts.

Nearly four years in the making

The opera was composed by University of Waikato senior music lecturer Mike Williams. Former staff member and current Unitec lecturer John Davies was the librettist on the opera which was nearly four years in the making. The Juniper Passion is set in the Battle of Monte Cassino in 1944; the libretto is dedicated to Richard Ferguson Davies – John Davies’ father who fought in the 1944 battles.

University of Waikato Distinguished Alumnus and historian Dr Chris Pugsley provided valuable historical insights about the battle, the bombing of the abbey and its aftermath which were later translated into the musical retelling of the story, including electronic sound effects, chamber orchestra and even the new Auckland Town Hall organ. The overarching story is based on fact, but the characters are fictional – a Benedictine monk, a German officer and New Zealand soldier.

The launch of the multi-media opera also marked the 100th CD by Attol Records. Representatives from Attol, the University of Waikato, Unitec, and Professor Iain Benson, a law expert with particular focus on the right of conscience and religion were present at the launch. Professor Benson was one of the principal drafters of the South African Charter of Religious Rights and Freedoms which was signed by all the major religions of South Africa in October 2010.