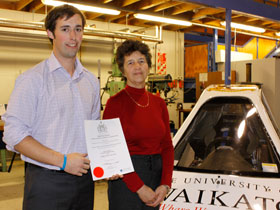 The students behind the battery electric vehicle which successfully drove from Auckland to Bluff have been highly commended for their work.

The accolade was given to the group as part of their submission for the Ray Meyer Medal for Excellence in Student Design. Recognition is given annually to excellent final-year projects with a substantial design component, which have been completed as part of an Institution of Professional Engineers New Zealand (IPENZ) accredited qualification. All five of the University of Waikato’s engineering programmes are fully accredited by IPENZ.

“A highly commended award was given due to the professional manner in which the team investigated, executed and reported on their design project. The high standard of their entry is testament to high technical competence, enthusiasm, commitment and the comprehensive tuition and guidance provided at the University of Waikato,” says Paul Stephenson, Awards Convenor.

BEV was built by the students over two semesters and is a single-seater commuter vehicle powered by a bank of 10 lithium-ion batteries. Building and getting BEV roadworthy was a challenge for the students working to tight deadlines and completing other papers in the final year of their degrees. They quickly lost count of the hours they spent on the car.

Prime Minister John Key was particularly impressed with BEV during a visit to a University of Waikato stand at Fieldays recently. Mr Key spoke to current student Benjamin McGuinnes, who talked him through the working of the vehicle.

The award aims to encourage a new generation of engineering designers and is named in recognition of Professor Ray Meyer who was actively involved in research design and commercialisation throughout his engineering career. Meyer continues to hold positions on the governing boards of a number of companies in which excellence in engineering is essential to business.

Now in their first year out of university, the four team mates are all employed in engineering positions. Matt Kershaw (pictured) is a materials handling engineer at Tetra Pak Hamilton, Tim Mason is employed by TWL in Taranaki, Greg McPherson works at MB Century in Taupo and Dale Oswald has found a position at Westfalia Automotives in Mount Maunganui.