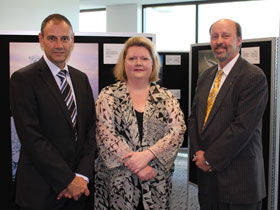 The nation’s first Canadian-New Zealand Studies Unit was launched at the University of Waikato last week.

The unit will foster research related to Canada, host visiting scholars, attract and support Canadian students to New Zealand and vice-versa, and enhance cultural and intellectual links between the two countries.

"We have so much in common with Canada – both nations have a desire to protect the environment and the Polar regions, and we have close ties and challenges with indigenous peoples.

“Establishing the CNZSU nicely complements two new research centres at Te Piringa – Faculty of Law that focus on energy and law, and Māori and indigenous governance, but it also will link with many other research centres and institutes at the University of Waikato.”

Canadian High Commissioner at the launch

Canadian High Commissioner Her Excellency Caroline Chrétien spoke about the importance of academic and cultural links between New Zealand and Canada and the ties between the Canadian Government and Te Piringa. The connection began in 2010 when the Canadian Government and Tainui Māori Trust Board collaborated to buy the faculty $6000 worth of Canadian books on an array of indigenous issues.

While at the university, Madame Chrétien opened an exhibit of Canadian Arctic photos entitled ‘Accessible Arctic’ that will be on display on the 4th floor of the Student Centre until April 30.

CNZSU will be hosted by Waikato University’s Te Piringa – Faculty of Law but is open to all disciplines and aspects of society. Dean of Law Professor Brad Morse says he’s pleased Waikato has already been recognised by the Canadian Government which has provided a $CDN12,000 grant for the unit.