Dynasty in the making at the University of Waikato 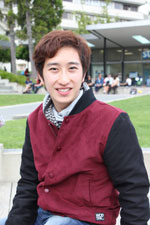 Addition to dynasty: Wei Cheng Phee is one of many Phee family members to study at the University of Waikato.

There’s a dynasty in the making at the University of Waikato.

Altogether 13 members of the Phee family, from Penang in Malaysia, have graduated from Waikato, three are current students (one of whom has just started), and there are still more to come, according to the family matriarch Chiew Bee Phee.

“Queen Bee” as she’s affectionately known to her extended family presides over a gaggle of nieces and nephews who are in Hamilton to complete their education at Hillcrest High School and the University of Waikato.

For the past 20 or so years, she has housed, fed, encouraged (and sometimes growled at) two generations of Phees during their studies.

The system certainly works; several Phees have moved on to do higher degrees in the UK, others have secured good jobs in New Zealand, Malaysia and further afield.

They include straight A student Mei Chern Lim, who graduated with a social sciences degree and has completed a Masters at the prestigious London School of Economics, and her older cousin Xin Ying Phee, who earned a science degree and a graduate diploma in management systems from Waikato, and now works for the Ministry of Health in Wellington.

Other members of the Phee clan have gone on to careers in government, finance, law and marketing, as well as the family’s printing and packaging business back in Penang.

Closer to home, in Hamilton you’ll find Phees in the University’s Computer Science Department and at Innovation Park.

“Not many people know how good the University of Waikato is,” says the family matriarch Chiew Bee Phee. “The first person in our family to come here was my brother Boon Eow Phee. He actually wanted to study in Australia, but changed his mind when he saw a picture of Milford Sound and realised how beautiful New Zealand was.”

Boon Eow graduated from Waikato with a science degree in 1979, went on to do a Masters and then had a stint as a university lecturer before returning to Penang to head up the family business.

Since then, there’s been a steady stream of Phees making their way to the Waikato. And they do well, under the strict eye of “Queen Bee”. So what’s her secret?

“I make sure they’re well-fed,” she says. “And I talk to them about what’s important. You have to know what you want and go for it.”

Dynasty in the making at the University of Waikato is licensed under a Creative Commons Attribution 4.0 International License.