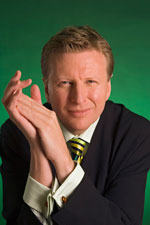 Cancellation: Piers Lane's concert tonight at the University of Waikato's Gallagher Academy of Performing Arts has been cancelled due to a bad fall.

A bad fall has forced the cancellation of tonight’s concert by international pianist Piers Lane at the University of Waikato’s Gallagher Academy of Performing Arts.

Academy manager Jeremy Bell says Lane had a bad fall, leaving him with extreme pain in his back and arm. He cancelled last night’s performance in Auckland and had hoped to be able to play in Hamilton tonight, but is in too much pain, Bell says. “He waited till this morning to see if it would be at all possible for him to play this evening at the Academy, but sent his apologies just before 9am. He is particularly upset as this is the first time he has had to cancel concerts in his 40-year career.”

Those with tickets will have them automatically refunded through Ticketek.