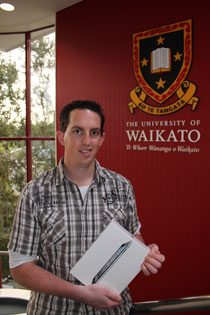 University of Waikato graduate Justin Den Otter is the winner of the university’s Fieldays iPad giveaway.

Justin was one of over 700 people to visit the University of Waikato Premier Fieldays stand and take part in a quick survey about the university. His name was randomly drawn from all participants in the survey.

The University of Waikato is a strategic partner of Fieldays.

A laboratory technician at Fonterra, Justin graduated from the university in 2008 after completing a Bachelor of Science and postgraduate diploma in chemistry.

“I test the nutrition of products for Fonterra – making sure what’s on the label is the same as what’s in the product.

“Every year at Fieldays I stop by the university stands to see what’s going on at the university and to see if there is anyone I know or any of my old lecturers working.”

Waikato University has a long-standing association with Fieldays – the university’s founding Vice-Chancellor Sir Don Llewellyn helped establish the event in the 1960s.

The university is the key tertiary institution in the Waikato region and has been a strategic partner of the National Agricultural Fieldays for the past six years.