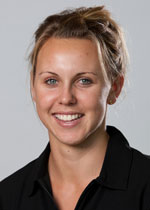 Sir Edmund Hillary medals are given to the best graduating Waikato University Hillary Scholars who have achieved at the highest level academically and in their chosen performing art or sport and have demonstrated exceptional leadership while on the programme.

Beach volleyball player Hannah Croad has recently completed her Bachelor of Management Studies (Hons) majoring in Marketing and Strategic Management and has been offered a graduate position at advertising giant Saatchi & Saatchi.

She’s also on the cusp of Olympic qualification, having spent the summer braving the elements competing in the New Zealand beach volleyball series.

“After a successful year of travelling the world, it's great to be playing some volleyball at home where the temperature rarely exceeds 25 degrees,” says Hannah.

“The good thing is that we’ve got a lot of international teams here at the moment for the New Zealand series, which is really great because it’s the best possible build-up we could have for Olympic qualifying.” 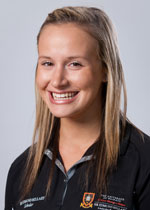 Dance scholar Alex Hitchmough recently completed the Honours year of her Geography degree, and is returning to Waikato to finish a Postgraduate Diploma in Political Science.

Currently undertaking a Summer Research Scholarship with Dr Karen Barbour, Alex is looking at site-specific dance research, focusing on the role that dance can play in developing a sense of community.

“Ultimately one day I’d love to work for the UN, but otherwise I’m really interested in working with community development organisations,” says Alex.

On top of this, Alex is currently working towards a performance at the Hamilton Summer Gardens Festival in February and is developing community dance workshops for Hamilton children from refugee backgrounds.

Throughout her time at university Alex has danced in numerous local performances, has travelled to the NZI Sevens to represent UK sports label Kukri, and has been a dancer and co-choreographer for the Chiefs and Piston's Cheerleaders.

Hillary Scholars have their course fees covered, receive specialist coaching and mentoring and take part in personal development and leadership programmes while at university.