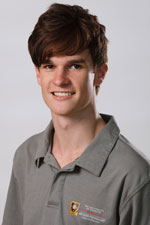 Former Whakatane High School student Dolan, 18, was inspired to study for a Bachelor of Music in piano performance after seeing University of Waikato lecturer and Head of Piano Studies Katherine Austin play.

“To be honest I'd never even considered Waikato but when Katherine Austin brought a group of music students to Whakatane I was really blown away by their performances and began to think Waikato would be a great place to study,” says Dolan.

“Classical music isn't so much about where you study as who you study under and I really felt like I could make huge progress with Katherine. I was also really impressed by the performing arts facilities on campus.”

Having played for about nine years, Dolan is no stranger to the piano but is looking forward to picking the brains of fellow students and staff at the Music school.

“I think most aspiring pianists would say they aim to be a concert pianist or part of a successful chamber ensemble,” says Dolan. “But I just want to progress as far as I can musically and see where that takes me career-wise - I would really like to study in Europe once I'm finished up at Waikato.”

Hillary scholar hoping classical music will help him see the world is licensed under a Creative Commons Attribution 4.0 International License.