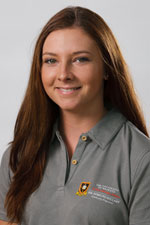 University of Waikato Sir Edmund Hillary equestrian scholar Samantha Felton has got her year off to a flying start, winning the Charisma Trophy at the Bay of Plenty Horse Trials.

Felton, 20, rode Ricker Ridge Pico Boo to win the trophy for the New Zealand Young Rider Eventing Championship at the Dunstan Bay of Plenty Horse Trials in Rotorua this February.

She was coming third after the dressage, but her show-jumping and cross country efforts soon put her in the lead, which she maintained to win the trophy.

Felton's riding started with a bribe

Felton has been riding for around 10 years and competing for the past seven.

"My family moved to New Zealand from Australia when I was 10, they bribed me and my sister saying 'we'll buy you a pony if you come', and I've been riding ever since."

"Eventing is the discipline for brave people. It involves dressage, show jumping and cross country - and a lot of 'guts' - it's more challenging because you have to be really good at all things."

Felton has been a University of Waikato student for three years, but 2012 is her first as a Hillary scholar.

Sir Edmund Hillary Scholarships are the University of Waikato's most prestigious scholarships and are awarded to students who are high academic achievers and are also achieving in the arts or sport. Scholars have their course fees covered, receive specialist coaching and mentoring and take part in personal development and leadership programmes.

"It's awesome to say that I'm a Hillary scholar. It means if I have an event it's easier to get extensions for projects and there's more freedom to keep riding."