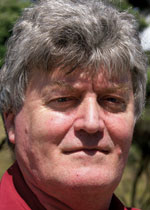 Poet, short story writer, columnist and editor Michael Morrissey is the University of Waikato's writer in residence for 2012.

Morrissey, a multi-award winner, has written more than 80 short stories, ten volumes of poetry, two novellas and more recently has received attention for his memoir Taming the Tiger which deals with his experience with manic depression, or bipolar disorder.

During his year at Waikato, Morrissey plans to revise a semi-autobiographical novel titled State of Grace. “The novel is set around 1950 against the background of one of the last polio epidemics before the vaccine was discovered,” says Morrissey.

“I’ll also be working on a new novel called Spiro Goes to Mars which focuses on New Zealand’s most violent anti-Vietnam war protest in Auckland in 1970. Apparently there were numerous FBI and CIA agents around at the time and so, using that as a springboard I have my set out characters out to lace Vice-President Agnew’s water with LSD, only things don’t go according to plan.”

Michael Morrissey says he’s thrilled to have been awarded the residency as it enables him to concentrate on major writing projects for a whole year free of financial worry. While staying in Hamilton, he hopes to explore the cultural life of the University of Waikato and the city.

He will begin his residence at the beginning of February and says if he can stick to his schedule, he’ll also work on a new book of poems entitled To Kiss this Rough World.

Waikato University’s writer in residence is funded by the University and Creative New Zealand. Dr Sarah Shieff from the University’s English Programme says she’s delighted Michael Morrissey is taking up the residency.

“We had lots of strong applications for the position, but Michael's application was particularly exciting. We're very lucky to have someone of his calibre and experience on campus for the year.”