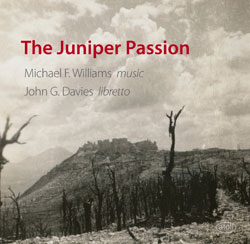 The Juniper Passion: University of Waikato composer Mike Williams will launch his latest opera, in remembrance of New Zealand's armed forces, with a free public session on Anzac Day.

In remembrance of NZ armed forces

Almost four years in the making, the World War II opera has been produced in remembrance of New Zealand’s armed forces. The Juniper Passion is set in the Battle of Monte Cassino in 1944; the libretto is dedicated to Richard Ferguson Davies – John Davies’ father who fought in the 1944 battles.

University of Waikato Distinguished Alumnus Dr Chris Pugsley provided valuable historical insights about the battle, the bombing of the abbey and its aftermath which were later translated into the musical retelling of the story, including electronic sound effects, chamber orchestra and even the new Auckland Town Hall organ. The overarching story is based on fact, but the characters are fictional – a Benedictine monk, a German officer and New Zealand soldier.

The Juniper Passion features former University of Waikato student Julia Booth, university staff member David Griffiths, and the orchestra was conducted by Dr Rachael Griffiths-Hughes. It was produced by Wayne Laird from Atoll Records and is the 100th CD to be presented under the Atoll Label since 1997.  The opera was supported by the University of Waikato, Creative New Zealand and the Lilburn Trust.

Multi-media opera to be launched on Anzac Day at Waikato University is licensed under a Creative Commons Attribution 4.0 International License.