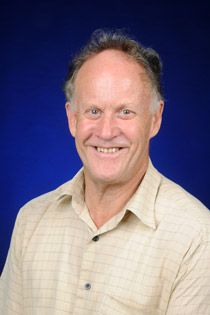 The work of Waikato University hydrologist Associate Professor Earl Bardsley has been acknowledged by the New Zealand Hydrological Society. He was awarded the society’s Outstanding Achievement Award at their annual symposium held late last year for contributions to New Zealand hydrological science and education.

Dr Bardsley, based in the Department of Earth and Ocean Sciences, has been at Waikato since 1980 and has authored or co-authored numerous publications on various aspects of water systems, ground water, hydropower generation efficiency and optimisation, pumped storage evaluations, and extreme value analysis of environmental risk.

He has five (soon to be six) PhD students under his wing at the moment and his current research focuses on the feasibility of transfer of South Island hydro storage away from the scenic lakes to a remote rock basin via pumped storage; developing self-simplifying hydrological models; hydrological seasonal forecasting; and he has developed a system for weighing water content over a small land area as it accumulates from rain.

On a larger scale he is currently investigating, in collaboration with the University of Colorado, the possibility of weighing the whole water content of most of the North Island from a gravity satellite, which would give a snapshot of the underground water situation.

Department Chairperson and fellow hydrologist, Dr David Campbell, says Dr Bardsley’s award is well-earned recognition for the impact he has had on New Zealand hydrological science education over many years, and for his innovative—and often provocative—research.

“There are very many hydrologists in New Zealand who started off by gaining their degrees at Waikato, and have gone on to successful careers in industry, consultancy or water management. Earl has a way of encouraging his students to think outside of the box.”