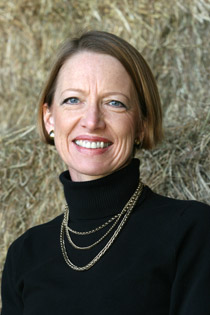 Agribusiness research and teaching at the University of Waikato takes a big step forward in March with the arrival of leading agriculture researcher and commentator Professor Jacqueline Rowarth.

Dr Rowarth takes up the position of Professor of Agribusiness at Waikato Management School, where she will consolidate and develop links with the wider agriculture sector in the region.

“The Waikato really is agribusiness heartland, close to the HQs for Zespri, Fonterra, Ravensdown, Ballance, TruTest and Gallaghers among others - and the University does a lot more with agribusiness than people realise,” says Dr Rowarth.

“My role will be to create links across the value-innovation chain. It’s a concept that’s been embraced by New Zealand Trade and Enterprise which is currently doing a lot of work on how to make improvements for the benefit of New Zealand.

“Waikato University is already ahead of the game in establishing an agribusiness focus, and we’re now aiming to create a step-change not only in the industry, but also in the understanding of what WMS can do for and with businesses.”

“Agribusiness is the foundation of the New Zealand economy and the heart of the Waikato economy,” he says. “As the world population grows from seven to nine billion over the next 40 years, global food production and distribution will become a critical issue. We intend that the Waikato will be recognised as one of the leading regions for expertise in this area.”

A frequent contributor to public debate on agriculture and agribusiness, Dr Rowarth was awarded a CNZM in 2008 for her services to agricultural science, and is a Fellow of the New Zealand Institute of Agricultural Science and a Companion of the Royal Society of New Zealand.