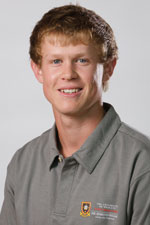 Ben Hyde: Awarded a Sir Edmund Hillary Scholarship for his achievements in cricket.

Ben Hyde’s passion and hard work in cricket has won him a Sir Edmund Hillary Scholarship from the University of Waikato.

Hyde, who started playing cricket when he was seven, has represented Northland in all age groups and is part of the Northern Districts U18 team, last year he was named the ND Academy Player of the Year.

The middle order batsman is one of 43 new Hillary scholars on Waikato University’s Sir Edmund Hillary Scholarship Programme, which awards scholarships to academic high achievers who show significant leadership qualities and also excel in sport or in the creative and performing arts.

“I’m looking forward to getting involved in the Hillary programme,” says Hyde, a former Whangarei Boys’ High School student. “It will be very useful and give me opportunities to develop my skills in cricket as well as help in my studies.”

The Hillary Scholarships provide full university course fees while studying at Waikato, comprehensive support for the recipients’ academic, sporting and/or arts activities, and additional support in leadership and personal development.

Hyde is in his second year of a Bachelor of Management Studies degree and says he’s working towards being named in the national U19 squad going to the world cup in Australia in August.

“Cricket requires a lot of commitment. Every weekend I’m playing cricket and in my spare time I’m in the gym working on my fitness and strength – but I wouldn’t have it any other way,” he says.