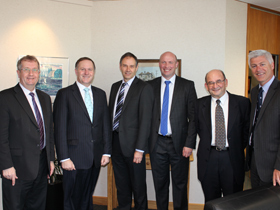 This is the second time in recent months the Prime Minister has met with Professor Crawford, speaking to him at the University of Waikato Fieldays stands last month.

The university is a strategic partner of Fieldays and had two stands – one featuring research particularly relevant to farmers and land based industry, and the other featuring work done by university students.

Mr Key was particularly taken with BEV – a battery electric vehicle designed and built by University of Waikato students.