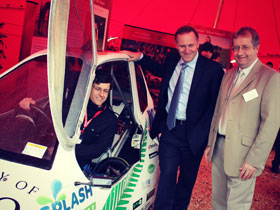 The three viewed university student research at the Innovation tent which included Dushyant Parmar’s farm gate, which has been tested in collaboration with LIC where he was on work placement, and BEV, the university’s battery electric vehicle.

Mr Key was particularly interested in BEV and spoke to student Benjamin McGuinnes who talked him through the working of the vehicle.

Vice-Chancellor Professor Roy Crawford says Fieldays is an excellent opportunity to showcase the university to land-based industry, the wider community, government ministers and the Prime Minister.

“I was glad the Prime Minister took the time to visit both our stands. This enabled us to show him how teaching and research at the University of Waikato is making a difference to land-based industries.”

The university is in its sixth year as a strategic partner of Fieldays. The university is once again running a seminar series featuring leading agricultural experts discussing future issues facing New Zealand farmers.