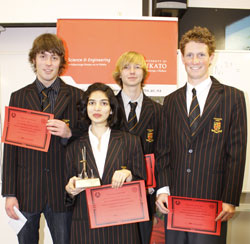 Accurate analysis of samples in the chemistry labs secured a win for four talented Year 13 students from Pukekohe High School. The team received first place at the annual NZIC Analytical Chemistry Competition, held at the University of Waikato.

The winning team was Aaron Boot, Tejal Acharya, Jack Dyche and Zaak Wijdeven. The students follow in the footsteps of a long line of previous Pukekohe teams, who have come either first or second in the competition for the last four years running.

The competition challenged 96 enthusiastic Year 13 students to spend a day in the university laboratories.

“The task was to analyse a sample of NiCl2.nH2O using a gravimetric procedure for Ni2+ and a spectrophotometric method for Cl-. This allowed the value of n to be calculated in the empirical formula by difference. This was a demanding task in the time available but some excellent results were achieved, with very little to differentiate the first half dozen teams,” says competition judge and key organiser, Professor Brian Nicholson.

“Rivalry was fierce but the main emphasis was on enjoying the experience and meeting students from other schools.”

Twenty-four teams of three or four students from the Waikato/Bay of Plenty regions entered in this years’ competition. All students were treated to lunch sponsored by The New Zealand Institute of Chemistry (NZIC), at one of the university’s halls of residence. The winning team received $160, donated by Hill Laboratories.