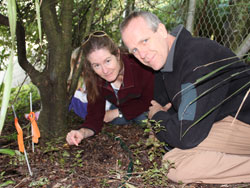 In the garden: University of Waikato PhD student Elizabeth Overdyck and DOC’s Dr Avibhakta Holzapfel in the Threatened Plant Garden.

A strange and rare plant has been successfully cultivated at the University of Waikato.

Dactylanthus (a Greek name meaning finger flower) is a threatened parasitic plant which occurs only in New Zealand. It has become threatened because animals such as possums eat the flowers and prevent it from setting seeds.

This is the first time that the Dactylanthus has been successfully cultivated at an educational institute. Its cultivation is part of a wider collaborative project between the University of Waikato, the Waikato Botanical Society and the Department of Conservation (DOC).

University of Waikato PhD student Elizabeth Overdyck, who is voluntarily involved with the Waikato Botanical Society, and DOC’s Dr Avibhakta Holzapfel sowed the Dactylanthus seed in 2007 next to the university’s campus greenhouses.

“It normally takes at least four years for Dactylanthus to flower after seed-sowing in the forest. Because it grows underground the only way to know whether the plant has been successfully established is when it blooms,” says Overdyck. She says they were not sure whether the seed-sowing would come to anything until a plant flowered recently. 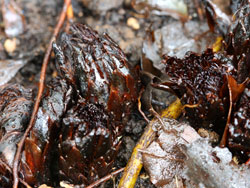 Endangered species: Dactylanthus has been successfully cultivated at the University of Waikato.

Dr Holzapfel says growing threatened species such as the Dactylanthus means scientists can learn how to protect them and it opens the door for further research. “Dactylanthus is the world’s only ground-flowering plant pollinated by a bat. We can learn so much more about this plant, such as what chemical properties in the nectar attract pollinators and which animals disperse seed,” he says.

The collaborative project has also seen the establishment of a new Threatened Plant Garden outside the university’s Faculty of Science and Engineering. Seeds from threatened species all over the Waikato region are obtained from DOC and sown by the Waikato Botanical Society which maintains the site with regular working bees.

The garden is presently home to 14 endangered species, brought together from different habitats so the seeds are sown with elements from their original environment.

Overdyck’s PhD focuses on urban forest restoration but she says cultivating endangered plants with the Waikato Botanical Society is part of her passion for saving native plants. “Although the Threatened Plant Garden is not directly related to my PhD, it is part of the wider concept of bringing conservation to people in urban areas.”