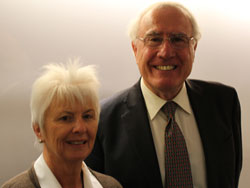 Former prime minister and practising international lawyer Sir Geoffrey Palmer reckons being secretary general of the United Nations must be the worst job in the world because every day huge problems land on his desk which he or his organisation are expected to solve.  And solving international issues is no easy task.

Sir Geoffrey was speaking at Te Piringa – Faculty of Law at the University of Waikato and told the audience of academics, students and practitioners about the five major disputes he’s been called in to work on – three involving New Zealand and nuclear issues, the Gaza flotilla incident in 2010, and the one that won’t go away – whaling.

Delays and mediation part and parcel of dispute cases

“I would like to see a quicker disposal of cases and the appointment of judges reviewed, but the International Court of Justice is an essential part of dispute settlement,” he said.

“The trouble is cases can get seriously bogged down.”  He said the Rainbow Warrior case was a good example of that where France wanted their agents released and New Zealand wanted compensation.  “In the end the prime minister of the Netherlands was called in to mediate and an understanding was thrashed out in secret negotiations in Switzerland.  It was a rough ride and at the time there was a lot of heat.”

Sir Geoffrey says disputes can only be resolved if they’re in a nation’s political interest.  If a country doesn’t want to resolve an international situation, it won’t, especially if it means political suicide. And he says the International Whaling Commission is a prime example of nations fighting each other to a standstill.  “We came close to reaching a compromise over whaling in the Southern Ocean, but it wasn’t settled.”

Sir Geoffrey also told the audience that international law papers should be compulsory at every law school because it’s a subject that unlocks many keys to a student’s future and teaches methods of thinking about problems and analysis.