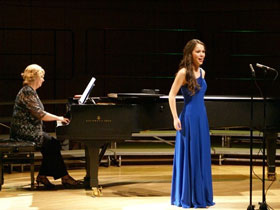 Singing sensation: Blaire White has been awarded a Sir Edmund Hillary Scholarship to study music performance at the University of Waikato.

A talent for singing has won a Hamilton student a Sir Edmund Hillary Scholarship from the University of Waikato.

Blaire White is one of 43 new Hillary scholars at Waikato. The Sir Edmund Hillary Scholarship Programme awards scholarships to academic high achievers who show significant leadership qualities and also excel in sport or in the creative and performing arts.

“I’ve been performing on stage since I was seven and I knew back then that singing and performing was for me,” says White, who’s studying a Bachelor of Music (performance).

She has gone on to perform in a number of Hamilton musical theatre productions and most recently played the role of Maria in Musikmakers production of West Side Story. She is also a past winner of the Under 18 New Zealand Aria competitions.

While at Waikato, White will be studying under Dame Malvina Major who was recently appointed Senior Music Fellow at the University of Waikato.

“Being given the opportunity to learn under a world-class teacher like Dame Malvina Major is fantastic, and to do so without a student loan hanging over my head is even better,” says White.

The Hillary Scholarships provide full university course fees while studying at Waikato, comprehensive support for the recipients’ academic, sporting and/or arts activities, and additional support in leadership and personal development.

White is excited about her studies at Waikato. “With support from the Hillary programme I can focus on what I really love doing – singing and performing,” she says. “I hope to one day go overseas and have a singing career working in opera and musical theatre.”