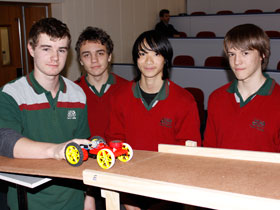 Winners: Tuakau College students (L to R) Andrew Hunkin, Scott Whitney, LiMing Teo and Aaron Crisp were the standout winners of the Capacitor Car Competition, with a distance almost double that of the second place getters.

Miniature vehicles built from scratch had a crowd of local secondary school students ooing and ahhing with anticipation at last week’s Osborne Physics and Engineering (OsPEn) Days event at the University of Waikato.

The Capacitor Car Competition was held during OsPEn Days and required students to build cars that could travel up a custom-built 9m long ramp which was set up along the front of a University lecture theatre. The cars performed individually and were judged on the maximum forward distance achieved on a single capacitor charge. While some cars motored up the ramp to applause, other cars inched their way along, slowly gaining the sought-after centimetres needed to succeed.

Interested students were sent component kits six weeks ago, allowing them time to build the vehicle from scratch. A capacitor is a passive two-terminal electrical component used to store energy in an electric field.

The competition was part of the University of Waikato’s 26th annual OsPEn Days, aimed at Year 12 and 13 students who are high achievers in science. Over 600 students from as far afield as New Plymouth and Hawke’s Bay attend lectures and practical demonstrations. The focus was on applications of physics, with speakers providing examples such as vibration, energy harvesting, capacitors and satellites to show how the physics they are learning at school can be used in the real world.

Osborne lectures began in 1986 in honour of Dr Roger Osborne, who taught physics at Waikato University from 1970 to 1985. During this time he was responsible for organising and presenting a significant number of lectures for Year 12 and 13 physics students in the Waikato region. From 2002 the lectures became known as the OsPEn Days.