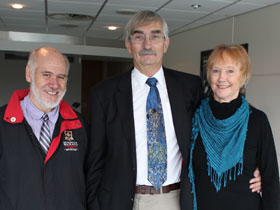 A key contributor to the linguistic study of Te Reo Māori has been honoured by the University of Waikato.

Dr Ray Harlow, who helped establish linguistics as a subject area during his 20-year career at Waikato, received an honorary fellowship at a ceremony at the Gallagher Academy of Performing Arts earlier this week.

He and his wife Ann were welcomed to the ceremony with a karanga, and Dr Harlow was able to respond to the opening comments by his university colleague Tom Roa in fluent Te Reo.

Pro-Chancellor Dr Brian Linehan bestowed the award, noting that Dr Harlow had enhanced the mana of the University through his outstanding service in the field of linguistics.

Dr Harlow said it was a great honour to receive an honorary fellowship. “It’s been a really great privilege to have been able to spend my entire working life mucking around with languages.”

Languages, he said, are valuable for the access they grant to other cultures and peoples, and to a much wider world.

Dr Harlow began his academic career as a classicist before turning to linguistics. He developed a specialism in Polynesian languages, and was instrumental in establishing the University of Waikato as a centre of study in Te Reo Māori.

He was a founding member of the Māori Language Commission, and is the author of a number of Māori language reference works.

Dr Harlow also worked closely with Māori colleagues at the University of Waikato to set up Te Kōhanga Reo O Ngā Kuaka, adjacent to the University, which celebrates its 25th anniversary next year.