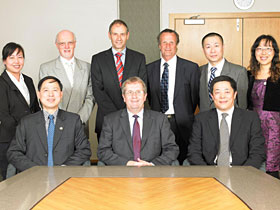 A top-level science and technology delegation from Shanghai has spent two days in Hamilton finding out more about the University of Waikato’s research into lake restoration and ecocity initiatives.

The four-person delegation from Tongji University’s College of Environmental Science and Engineering was led by the University’s Vice-President, Professor Jiang Fuming.

One of Waikato’s key partner institutions, Tongji University regularly ranks within the top 25 Chinese universities. Tongji hosts the Institute of Environment for Sustainable Development in partnership with the United Nations Environment Programme, which, like Waikato, has a strong research focus on water quality.

During their visit, the Tongji group had discussions with Professor Bruce Clarkson, Dean of the Faculty of Science and Engineering; Professor David Hamilton and Professor Bob Evans.

“In particular, the talks focussed on research both universities are conducting on a fresh water lake in China, and are likely to result in Waikato researchers visiting their Tongji counterparts in Shanghai later in the year with a view to developing joint projects,” he said.