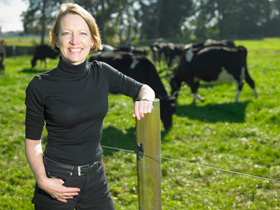 Professor Jacqueline Rowarth: “Most people no longer have connections with the land, but research shows the majority of New Zealanders agree that if the rural sector is doing well people in the urban sector will be better off."

We might be mostly townies these days, but we still value the rural sector. And that’s why the National Agricultural Fieldays is such an important annual event, says the University of Waikato’s inaugural Chair of Agribusiness, Professor Jacqueline Rowarth.

“Most people no longer have connections with the land, but research shows the majority of New Zealanders agree that if the rural sector is doing well people in the urban sector will be better off. Conversely, only a minority of rural New Zealanders are convinced of the importance of urban New Zealand.”

“This country is too small for disconnect. We are only 4.4 million people, but we feed approximately another 20 million overseas, and there is potential to supply even more food with the application of innovation, creativity and technology to the agri-food value chain.”

Professor Rowarth is spearheading the University of Waikato’s agribusiness research and teaching programmes, which complement existing research strengths in terrestrial and freshwater ecosystems, and other areas adding value to land-based industries.

She says the University of Waikato is perfectly situated to contribute to innovation in the sector.

“The Waikato really is the Silicon Valley of agribusiness,” says Professor Rowarth. “The herringbone milking parlour, the electric fence, in-line milk sampling, and added value milk ingredients all came out of the Waikato.”

She says innovation is fostered by the fertile mix of businesses and organisations in the region, including Fonterra, Ballance Agrinutrients, TruTest, LIC, DairyNZ, Shoof and the Gallagher Group among others, plus a clutch of crown research institutes, industry bodies, Waikato Innovation Park and the University of Waikato.

The University of Waikato is a strategic partner of Fieldays, and Professor Rowarth will be facilitating a series of discussions on this year’s Fieldays theme, the changing face of farming. She will also join other Waikato academics to present the latest research relevant to land-based industries.

Get all the latest on Fieldays