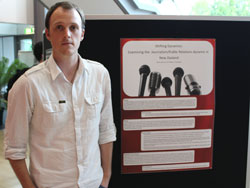 Rocky: Waikato student Steven Hitchcock says the relationship between journalists and public relations practitioners isn’t as bad as it once was.

A University of Waikato student’s study has found the tumultuous relationship between public relations practitioners and journalists isn’t as rocky as it once was.

The changing face of journalism

Hitchcock’s research is part of a larger study being undertaken by Professor Kay Weaver looking at the changing face of journalism and the impact this has on the news media in New Zealand.

The research has attracted interest from a wide variety of journalists and news media organisations keen to participate in the discussion about the changing media environment and how they are adapting to the use of new technology, changing audience expectations and increasing financial pressures.

“This comes from the impression that PR practitioners aim to get their corporate agenda into news media. In a similar way we have this belief that journalists are this public watchdog, always relaying the objective and absolute truth.”

Hitchcock says financial pressures, the tabloidisation of news and more demanding deadlines have changed journalists’ minds, and now instead of seeing a move to PR as a “move to the dark side”, many journalists see this as a fairly normal and understandable career change.

“Times have really changed, especially in the world of journalism, and I think that is principally because of financial pressures.

“The relationship isn’t what it once was. Amid the 24 hour rolling deadline, high stress, low pay environment that journalists are working in - more and more they are looking to PR practitioners as people who can help them and make their job easier.”

To conduct his research Hitchcock interviewed 30 journalists and PR practitioners on how they understand themselves as communicators in New Zealand.

A future study will look at the impact of this changing relationship on the news media.