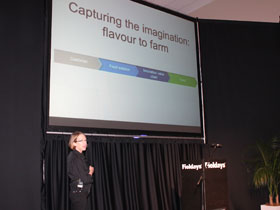 Committed: Professor Jacqueline Rowarth spoke at the Stakeholder Breakfast where the University of Waikato pledged its commitment to agricultural research and development.

The University of Waikato pledged its commitment to agricultural research and development at its Fieldays Stakeholder Breakfast held this morning.

Waikato University is in its sixth year as a strategic partner of Fieldays and the relationship is set to continue, with Vice-Chancellor Professor Roy Crawford saying Fieldays is a great vehicle to promote the university's research and development.

“We use Fieldays to showcase a lot of the research and technology we develop at the university that is relevant to the agricultural sector - it is one thing to do the work in a laboratory, but you also have to communicate your findings to the right audience.”

The university’s two stands and its annual Fieldays Seminar Series were a prime opportunity for the public to interact with university experts and to learn about research and development taking place at the university, said Professor Crawford.

Challenges to the sector

The Stakeholder Breakfast speaker was new Agribusiness Professor Jacqueline Rowarth who spoke about the issues stifling innovation in New Zealand.

"Many people would say New Zealand tops the world in terms of innovation because of our number eight wire mentality, but we have a problem coming.”

Professor Rowarth said the change to NCEA standards in schools - which promoted “box-ticking” instead of individual thought - and running research institutes and universities by a commercial model were threats to innovation and development.

“Our best hope is from the companies that are at critical mass. I see Fonterra doing it, and the Gallagher Group is doing it – the big companies will continue to be better at promoting innovation.”

In collaboration with Fieldays, the University of Waikato also announced the inaugural Fieldays Scholarship for graduate students completing agricultural research. The scholarships, each worth $11,000 were awarded to Mark Benseman and Max Arrowsmith.