University generates millions for the Waikato 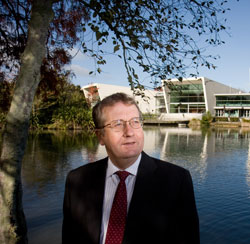 The University of Waikato and its students generated $770 million in the Waikato economy last year – 4.5% of the region’s annual revenue.

In a newly-released report commissioned by the University, independent economist Dr Warren Hughes analysed the University’s contribution to the region and the country.

The study shows that spending by the University generated $836 million in the New Zealand economy overall. That figure includes direct spending, including by students, as well as the flow-on effect into other sectors, including retail, transport, energy, sport and recreation and personal and community services.

The University contributes 4.4% to the economy of the core Waikato region which takes in Hamilton, Raglan, Cambridge, Te Awamutu, Huntly and Ngaruawahia.

Vice-Chancellor Professor Roy Crawford says that the economic impact study again underlines the crucial partnership between the University and the wider Waikato region.

“Economists talk about ‘communiversity’ - the partnership activity between universities and their home cities – and clearly it is to our mutual advantage that we continue to work together to maximise the economic, as well as the teaching and research benefits that the university and other tertiary institutes bring,” he says.

“Waikato University is committed to working with local businesses and industries and ensuring our teaching programmes and research are led by the needs and priorities of the region. Our ongoing focus on enhancing our reputation nationally and internationally is at least partially driven by the advantages to the region of having a world-class university at its doorstep.”

Hamilton-based students spent an estimated $130 million in addition to their university fees and accommodation. In Tauranga, the University is directly responsible for creating 50 jobs in the city and students spent a further $4.3 million.

Professor Crawford also says it is also worth noting the scientific contribution core Waikato makes nationally. “The University is an integral part of this science community and together with Ruakura Research Centre and CRIs, we contribute 14% to the New Zealand economy with just 5.8% of New Zealand’s population.”

Dr Hughes notes that University towns have always been regarded as somewhat recession proof, and have higher wages largely due to a higher proportion of the population having degrees.