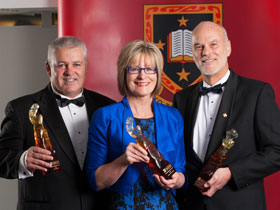 Mr Gatland completed his teacher training at Waikato in 1986. While teaching full-time he played a record 140 games at hooker for Waikato. As an All Black he toured Australia, Canada, Wales and Ireland, France and Argentina.

When he took up coaching Mr Gatland found his teaching experience prepared him well for running rugby teams. He’s been Ireland’s national coach, director of coaching at London Wasps, coached Waikato in the early 2000s, and was technical advisor for the Chiefs in 2006 before Wales offered him their top job. Warren Galtand’s contract with Wales has been renewed until 2015 making him Wales’ longest serving national coach.

Mr Sherwin graduated with a Masters in Social Science in 1976 and immediately began work on what was to be a 25-year career at the Reserve Bank of New Zealand, where he headed many key departments and dealt with major issues including the 1984 foreign exchange crisis. He was appointed Deputy Governor of the Reserve Bank in 1993.

Mr Sherwin was elected to the Executive Board of the World Bank in Washington DC where, on a two year secondment from the Reserve Bank, he represented the interests of New Zealand, Australia, the Republic of Korea and a number of Pacific nations.

In 2001, Mr Sherwin was appointed Director General and chief Executive of the Ministry of Agriculture and Forestry. It was for his services to the Ministry that Mr Sherwin was made a companion of the New Zealand Order of Merit in 2010. He began work for the Productivity Commission in May 2011.

Mrs Horrison-Hume is the Director of Anglican Action and has championed a range of social justice initiatives, including the creation of the Te Ara Hou social services village in Hamilton. Born in South Auckland, Mrs Morrison-Hume left school at 15 and held a series of secretarial jobs before leaving the workforce to have a family.

In 1992, she began a “New Start” bridging programme for mature students at the University of Waikato and then went on to graduate with a Social Sciences degree in 1997. Shortly afterwards, she took up the directorship at what was then Anglican Social Services and is now known as Anglican Action.