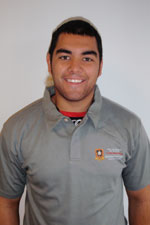 University of Waikato Sir Edmund Hillary scholar Hamiora Mihaka is looking forward to balancing academia and sport in his first year at university.

Hamiora, 17, from Rotorua, is a New Zealand Warriors junior development player and will have to balance travelling to Auckland to train with studying at Waikato as he works towards a mechanical engineering degree.

Rugby league the sport for Mihaka

“My interest in rugby league started when I moved up to Auckland to attend school, which was especially for league. I had always loved rugby from a young age but eventually saw rugby league as the sport for me,” says Hamiora.

“I’ve been involved with the Warriors development squad for around a year and this involves going to Auckland a couple of times a year to take part in league-specific skills development training and being reviewed on how I’ve played throughout the season."

Looking to build on record of success

The former St Paul's College second-rower is hoping to continue the success he had at high school when St Paul's won the National Secondary Schools Rugby League Tournament in 2009.

"On top of this I play in the Taniwharau Prems in the Hamilton competition so it keeps me quite busy.

“I choose to study mechanical engineering at Waikato because it’s closer to home and I believe that I have more of an opportunity to succeed here both academically and in sport.”